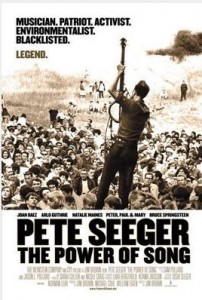 Pete Seeger was one of the most important voices and influential musicians in America. He died at age 94 on January 27. In memorium, and due to popular demand, World Community will host a screening of the Emmy Award winning feature documentary, “Pete Seeger: The Power of Song” at 7:00 pm on Tuesday, February 18th at the North Island College theatre in Courtenay.

This music-filled documentary chronicles the life of this legendary artist, political and environmental activist. It includes interviews with Arlo Guthrie, Bruce Springsteen, Bob Dylan, Joan Baez, Natalie Maines of the Dixie Chicks, and several Seeger family members, but Seeger’s music is the hallmark of the film. Expect some singing to break out!

Pete Seeger was the architect of the folk revival, writing some of its best known songs including “Where Have All the Flowers Gone,” “Turn, Turn, Turn” and “If I Had A Hammer.” He got a whole generation interested in playing guitar and banjo, got them singing together, while using music as an instrument for social change.

Largely misunderstood by his critics, including the US government, for his views on peace, unionism, civil rights and ecology, Seeger was targeted by the McCarthy era witch hunt of the 1950s. He was picketed, protested, blacklisted, and, in spite of his enormous popularity, banned from American television for more than 17 years.

After making the film, director Jim Brown stated, “Pete Seeger’s ethics are pure. He believes that everyone is equal. He built his own log cabin and lives simply in the woods. Pete has a complete distrust of commercial forces… fame and the corporate and military influences on democracy. He hates the word career, and has no interest in personal gain, shuns publicity and works tirelessly with his wife, Toshi, because he believes we are blindly destroying the world. He might be right. There are lessons to be learned by exploring his life and music.”