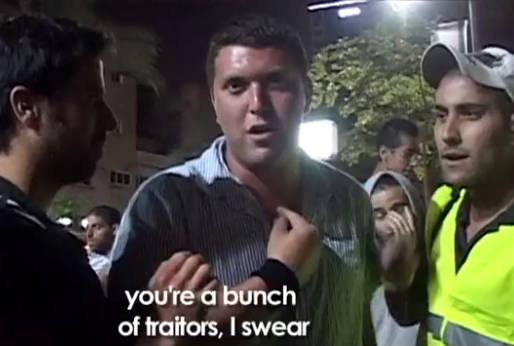 World Community will screen the new film On the Side of the Road Tuesday, Oct. 28 at 7pm at the NIC theatre, Courtenay.

Filmmaker Lia Tarachansky will be in attendance for a discussion after the screening.

Tarachansky grew up in Israel’s largest settlement, Ariel. When the second Intifadah broke out in 2000 her family moved to Canada where, for the first time, she met Palestinians. When she became a journalist, she returned to Israel to become the local correspondent for The Real News network. Returning to her settlement, she “discovers” the Palestinians next door as she travels the West Bank covering the Israeli military occupation.

In this film she meets with those who played a personal role in the events of 1948 and like her, “discovered” that which they had not only erased from their consciousness, but erased from the map. For years she tries to convince veterans of the 1948 events to question and dig deep into their memories. The film took five years to complete. This is a film about the questions Israelis cannot ask, about memories that cannot be uncovered, and the history that’s struggling to come to light.

It was in 1948, three years after the holocaust, that the Jewish state was established in a war that led to two-thirds of the Palestinian people becoming refugees. Those who fled or were expelled remain in camps throughout the Arab world, the West Bank and Gaza. In 2009 the Israeli government proposed a law that forbade mourning this history.

Don’t miss the opportunity to hear about this complex history from the unique perspective of an Israeli- Canadian with strong roots in the region.