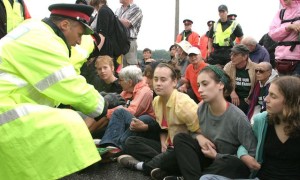 When the current federal government decides to transform the correctional system to one that puts punishment first, Canada’s rehabilitative prison farms are some of the first casualties. This provocative film portrays a citizens’ movement of civil disobedience to halt the plans to close Frontenac Farm, which was producing fresh milk and eggs for prisons in Ontario and Quebec, as well as eggs for the Kingston food bank. Even officials conceded that the farm was profitable.

There is a particularly redemptive scene with a former inmate describing how he helped a cow give birth to her baby calf– the kind of positive and enriching experience that might just help when released from the prison walls.

The film asks important questions about the consequences of a hardening approach to criminal justice, food security….and democracy itself.

Everyone is welcome. Admission is by donation.