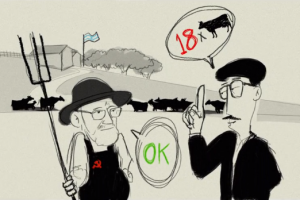 Through a clever mix of animation and interviews, The Wanted 18 recreates an astonishing true story: the Israeli army’s pursuit of 18 cows, whose independent milk production on a Palestinian collective farm was declared “a threat to the national security of the state of Israel.” Poignant and thought-provoking, humorous and serious, it shows the power of grassroots activism, peaceful resistance and courage in a part of the world that is fraught with negative imagery and despair.

Admission by donation. Everyone Welcome Click here to Watch the Trailer