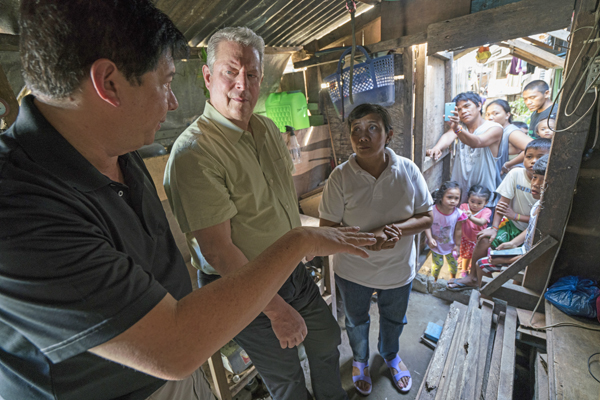 When Al Gore released Inconvenient Truth over a decade ago, climate change was thought of as a hypothetical issue by most people. You had to understand complex graphs and computer models to grasp it. Today, most people have experienced enough extreme and record-breaking weather to know that climate change is very real. World Community is screening Al Gore’s follow up film, Inconvenient Sequel: Truth to Power.

This film is far more than a slide show. There is footage of Gore giving talks around the world, but we follow Gore off the stage too, as he experiences the real effects of climate change, wading through Miami high tides swamping the city streets, or visiting with victims of Typhoon Haiyan that devastated Tacloban City in the Philippines. But the most compelling material follows Gore at the Paris climate talks in November 2015.

An Inconvenient Truth, is a standalone accomplishment in the history of American climate politics. Multiple studies have found that the movie really did shift public opinion on climate change. Inconvenient Sequel promises to have an even greater impact.

Our next film screening will be:

I Am Not Your Negro – Tuesday November 14, 7pm at NIC  –  Click here to watch the film trailer