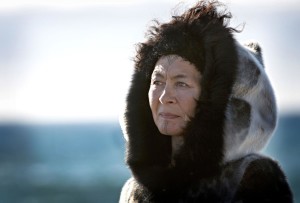 Award-winning film, Arctic Defenders, takes us on a journey to Canada’s “true north” in World Community’s first film screening of 2016 on Tuesday, January 19 at 7 pm at the Stan Hagen Theatre at North Island College.

Set in the dramatic and alluring landscape of the north, Arctic Defenders tells the remarkable story that began in 1968 with a radical Inuit movement in Canada. It led to the largest land claim in western civilization, orchestrated by young visionary Inuit with a dream – the governance of their territory – the creation of Nunavut.

The story reveals the dark side of Canada’s claim of sovereignty in the north. The Inuit in Resolute Bay had been moved over two thousand kilometers from their home in Inukjuak (Port Harrison), Quebec in order to bolster Canada’s claim for sovereignty of the north. They were dropped off by ship and left to fend for themselves without proper supplies or shelter. Separated from their families back home, they had never before experienced such cold and winter darkness.

The film finds hope and inspiration from determined Inuit who changed the rules of the game.

Everyone is welcome. Admission is by donation.

This film will not be part of the World Community Film Festival Feb. 5th & 6th.