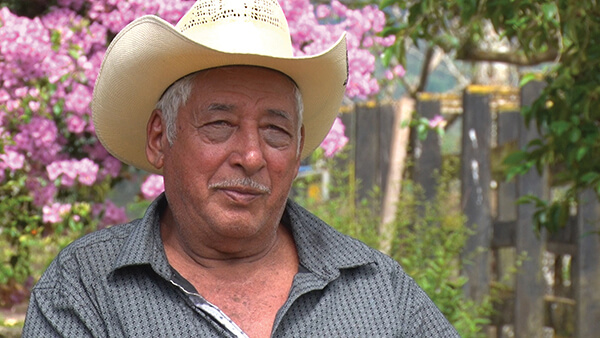 Journey to organic coffee farms in the jungle highlands of Nicaragua (the source of World Community Coffee). Using 4×4 vehicles, co-op staff of both Flor de Pancasan and Flor de Dalia visit several mountain farms to discuss their fair trade arrangements. These intimate visits reveal how the cooperatives and fair trade policies have brought some security to family life. This observational film also follows the process of both cacao and milk production through remote regions of what is considered the poorest country in Central America.

More About the Project

Comox Valley filmmaker Ed Carswell spent several weeks  near the mountain town of Matagalpa, the closest city to the source of World Community Coffee.  Carswell hired a translator Heyling Chavarria to assist with the interviews. Their first stop was the tiny town of Pancasan, where the biggest building is the co-op.

“It’s in the middle of the jungle, a very rural setting – coffee plants, banana trees and howler monkeys that wake up at 5 a.m.,” said Carswell, a part-time co-ordinator at the Courtenay-based World Community. “Rich imagery is everywhere. The challenge became deciding on which way to point the camera.”

From there, the film moves on to the small town of Dalia.  About half of World Community Coffee comes from the co-op in Pancasan and the other half from the co-op in Dalia. By belonging to a co-op, Carswell said that farmers receive a better price, and take comfort in knowing they have a consistent buyer. “This approach gives farmers a lot more security. The coffee business has been pretty cut-throat, and farmers often make next to nothing. That’s why these fair trade initiatives are so important.”

Proceeds from World Community Coffee sales support these co-ops as well as health care in Nicaragua. Since 1999, World Community has been donating $10,000 to $12,000 a year to Atencion Primaria en Salud (APS), a non-profit designed to improve the availability and quality of primary health care in the country. About 250 community health workers provide service to 195 rural communities.